I like to see it lap the miles,
And lick the valleys up,
And stop to feed itself at tanks;
And then, prodigious, step

Around a pile of mountains,
And, supercilious, peer
In shanties by the sides of roads;
And then a quarry pare

To fit its sides, and crawl between,
Complaining all the while
In horrid, hooting stanza;
Then chase itself down hill

And neigh like Boanerges;
Then, punctual as a star,
Stop — docile and omnipotent —
At its own stable door. 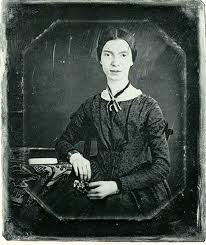 For all those aspiring to fame do read this second little piece…it has no title.

How dreary to be somebody!
How public, like a frog
To tell your name the livelong day
To an admiring bog!

It was a surprise to me to find these two humorous poems by Emily Dickinson.  Although there are some gems of philsophy among her collection, this is the first time I have seen that extra spark!  Emily, known for the fact that she only published six poems in her lifetime is much discussed. Thank you for visiting me. Please return to the Hub page of Tuesday Poem where you will find much to intrigue and satisfy your poetic longings.