No poetry today. Grandma and I have decided to come out and celebrate!

PRESS RELEASE FROM ‘GRANDMA’ re GRANDMA JOINS THE ALL BLACKS

‘Grandma’ is delighted to see that she has been included in the short list of 20 books for New Zealand’s favourite bestselling NZ book title, for the last decade. She nearly fell off her chair when she found out. The booksellers made up the list and it’s all about the books booksellers love to sell most. Helen, that’s me, is rather overwhelmed by such an honour and had to have two tablespoons of Grandma’s curative marmalade to calm her down. However, she, that’s me, would like to say that there were a lot of people involved in the production of this book…Australian illustrator Craig Smith, Harper Collins NZ, designers, printers, the lovely booksellers who sell these books and who organised this event in celebration of Bookshop Day on the 27th October. ‘Most of all,’ adds Grandma, ‘thank you to  all of you readers out there.’ So congratulations and thank you everybody for the part you have played in it’s success. To read about the other Grandma Books go here.

GRANDMA JOINS THE ALL BLACKS
This story begins with Grandma’s plans to be a ‘good grandma.’ She even takes her knitting when she goes to watch the All Blacks in training. She sits and waits and knits but where are the boys? They’re hiding in the change room. Luckily, there’s nothing wrong that a dose of Gran’s marmalade can’t fix. 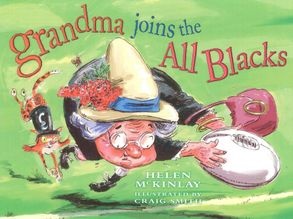 Next morning however, the team refuses to get up. The coach asks Gran for help. ‘They need a break,’ she tells him. She puts her granny chores aside and leads the boys off for some fun and adventure. By Friday, their enthusiasm is restored. But on Saturday when Gran arrives at the stadium to cheer them on in the big match, disaster awaits. The captain has chicken pox. Grandma takes on yet another challenge as she dives into the fray, marmalade, boots and all.
Published by Harper Collins NZ, October 1st, 2007 and many times reprinted.

Tuesday Poem Blog is here if you wish to return or pay it a visit.