Greetings All, if you read my last post, Has Anyone Seen Gorbo? you will know I was paying homage to the imagination and resilience of children.

My five year old grand daughter and I had decided that since I could not visit her, Gorbo would go instead. (Gorbo is a large monkey, a much-loved soft toy from my children’s childhood.) And so began our pretend story. You can read the post Has Anyone Seen Gorbo? see the photos and check out the story so far. Those who have read it, will know that he was on his way to see my grand daughters in Auckland.

My five year old grand daughter and I had decided that since I could not visit her, Gorbo would go instead.  Under the auspices of Magic Airways.com she made him an aeroplane to travel in and I helped him pack and waved  goodbye. But he did not arrive.

After he left my house, I had handed the responsibility of his travel arrangements over to T, as we call her for short, but it turned out that pretend travelling in lock down can have as many complications as the real thing.  I persuaded T to contact MagicAirways.com. and see what was happening.

After a lot of discussion about what was real and what was pretend she did so and found that Gorbo’s flight had diverted to Wellington where he was  in the Koru Lounge, being looked after as the VIP he is. And then, nothing. Magic Airways lost contact for a few days. Had anyone seen Gorbo? I did hear from an undisclosed source, that Gorbo was living it up with a group of friends and had been seen swinging though the rafters at Wellington Airport.  See below. I can’t spot him but maybe you can.

Finally on Monday T heard from MagicAirways.com that Gorbo was booked into seat seven and was to arrive that night. But …again no Gorbo.  However yesterday, someone reported they had seen him flying over Mount Taranaki in his cardboard box aeroplane,which inspired T to prepare a landing strip for his arrival. This  being a pretend story it had to be pink.  See below.

The Customs Officer awaits. (Minnie Mouse got the job.) The power of the imagination! She’s very glamorous isn’t she? And of course there had to be a welcome party. Here they are below.

Several seem to have fainted in the excitement of waiting. Apparently T has arranged a special treat.  Gorbo will be taken to McDonalds where there will be a party for him and he will be given a free toy. If I know Gorbo he will be delighted.

Breaking News at 5.30pm. Gorbo has arrived. I am waiting for a photo. I hope he has a nice time up there. I quite miss him. Lucky it’s a pretend story!

A few hours later…I have received a photo!  Gorbo arrived complete with a new friend, Jo, who also helped with the flying. 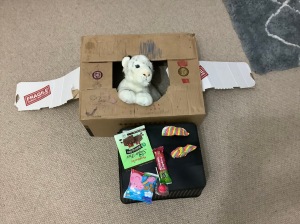 Apparently it was a pretty rough trip. It has been a bit wet over the last couple of days…Gorbo isn’t in the photo. It seems he is still suffering from air sickness and had to rush off. Or maybe he ate too many goodies …

But you can see that the plane has suffered a battering. What an adventure they’ve both had! The McDonalds treat might have to wait for tomorrow.

Lots of us are wishing that Covid 19 is a pretend story too! I wish you all the best in developing the skills we all need to manage this new way of life. Be kind to yourselves and others. Multiple Blessings and Arohanui, Helen and family. Thank you to my grandchildren and their patient mums for supporting the emergence of this story.