I was born into your arms
and from then my little heart was a fig
in your mouth
to be bitten and swallowed,

and your blue skies were to forever be
my blue skies,
your green hills,
mine,

mirrored in the
curve of my body,
the lines on my palm,
my body
a map of my beginnings.

Poet’s Comment: ‘The poem Onetahua was included in my book Stofumyrkur and is an ode of sorts to the landscape which raised me, which I still feel profoundly influenced and shaped by.’

Bergrún says she wrote this poem in English before translating it into Icelandic. (See below.)

Helen’s Note: It is a privilege to publish Bergrún Anna here. I have known her since she was very small, and seen her grow into a talented young woman, so it is exciting to see her on my blog sharing her poetry. I certainly hope to see more of her work in New Zealand in the future. Thank you Bergrún.

Bio in Brief: Bergrún Anna Hallsteinsdóttir Stocker (1986) was born and raised in Takaka, Golden Bay and is of Icelandic/New Zealand heritage. After finishing a Bachelor of Arts in political science and gender studies she moved to Iceland to better acquaint herself with her family and culture there. She has worked as a music writer for Icelandic newspaper The Reykjavík Grapevine and is currently a student at the Icelandic Academy of Arts, studying towards a BA in visual arts where she regularly uses her poetry in combination with performance, video, sculpture and installations.

Onetahua is the Maori name for Farewell Spit which encircles Golden Bay. See below. 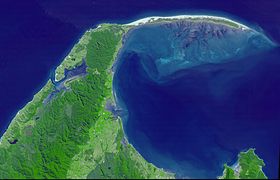 Next week I will bring you another poem from Bergrún and a taste of her artwork.

And now, please go on over to Tuesday Poem, where Helen Rickerby is this week’s editor with the following poem.  Click on the title below.

‘Poroporoaki to the Lord My God: weaving the Via Dolorosa’ by Anahera Gildea