Why has he come here
the Dalai Lama
to talk to me of China and Tibetans?
What can I do about China?
I can’t even find my shoes.

I’m sure I left them in my friend’s car
but she says,
‘no they’re not there.
Try Shirley.’

I think they’re in someone’s deep freeze.
They are red.
Someone has peered in the bag
said ‘ah, mince,’
and tossed them among the beef burgers.

The Dalai Lama
he has a lovely laugh.
I could tell him about my shoes
deep frozen
waiting to be turned into goulash.

He would chuckle and gurgle
then peer at me and say,
‘better to keep shoes in freezer than dead cows.’

I wrote this poem in the 1990s.  I was living in Golden Bay and we had taken the girls over to Nelson, to see the Dalai Lama. Also I had lost my red shoes, so that much is true. This poem has been around a lot.  I love reading it to an audience. I read the title and then pause.  That’s probably all they need to hear.  It was published in Boulder Writers 2, (Nelson 2008).  To read more Tuesday Poems, please return to the Tuesday Hub where Elizabeth Welsh discusses a stimulating poem by Mary Cresswell. 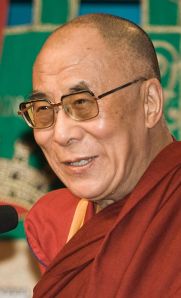